“Hola” was the first and only word they ever said to each other, which was especially ironic as it turns out, because neither one of them spoke Spanish. But they both thought the other must. After all, they said, "hola". She is a dark-haired American, there on holiday and he, looking suspiciously Latino, turns out to be Canadian.

They smiled after their Spanish greetings and kept walking in opposite directions on the abandoned beach. This was low season and the beach was their own. Hola, they kept hearing in their imaginations. Hola. Who was this Mexican muse? They both kept walking in their paths, acutely aware of the gravitational pull of the other person going in the opposite direction. They were intrigued by the other's seemingly exotic appeal, interested in learning more...but walked away none the less. What else was there to do? Neither wanted to interrupt the other's beach walk. But their thoughts, as they walked, were filled with the other. Who was this Mexican amazingness? What was their story?

At long last, many footprints down the beach, tired of the mindgames, she relented and turned her gaze over her left shoulder to try to catch his, but he was meandering along, seemingly lost in his own thoughts, not returning her gaze.  Oh well, she thought and moved on. Then moments later, giving in to his relentless impulse at last, he gazed at her over his right shoulder hoping to catch her eye, but she was earnestly walking away, without so much as a glance. Oh well, he thought. And they never looked back at each other again until they were so far from each other, they were no longer recognizable as potential soulmates.

But each kept thinking of the other, creating a full dream out of a fleeting greeting. What would their life be like together? How would they live? What did they name their children? So by the time they reached their respective ends of the bay and turned back, each had created an enormous fantasy life for the other, full with Spanish drama, dreams, disappointments and eventual divorce.  It would be too hard. This could never work. They were so different after all - - this Canadian and this American.

Until eventually, meeting once again in the middle of the beach, their lives lived, the romance had fizzled into simply a nod, no other words desired or required. The love affair was over. The only proof of it: the footprints. Finito.
Posted by Kim Schultz at 9:31 AM No comments:

So I'm writing a memoir. Maybe you knew. It's about falling in love with an Iraqi refugee in the middle of war, revolution and an arranged marriage. Sigh.

Last year, I decided I was only going to write it if I found a publisher. I wrote sample chapters and a book proposal and decided that was enough. Let someone ask (read: pay) me to finish it.

So I did. I finished the book. And you know what? He was right. Now I have this thing and I'm talking to agents and publishers and maybe something will happen that route or maybe I'll self-publish. But I have a book. I wrote a book.

An acquaintance friend of mine fell out of touch two years back, but recently reached out to me. She apologized for her absence and explained it by disclosing she was diagnosed with a terminal illness. Terminal.

Life is indescribably short. Write the book.
Posted by Kim Schultz at 10:19 AM 2 comments:

She would say “You'll work yourself to death, Hacinto.”

She would say, “Your family misses you!”

She would say, “Please Hacinto, you are more important than any money you make.”

And so it continued and year after year, his children grew, his wife conceded, and the distance between them all grew, until yesterday, unexpectedly, she died. And today, all alone, raking the same sand he has raked for 25 years, Hasinto finally stopped. He put down his rake, looked at the ocean crashing into the shore, feeling as though the waves were crashing onto his own heart and announced to no one in particular, “I am taking today off.”

“Okay,” the boss later agreed. It was that easy. Everyone trusted Hacinto and wished him nothing but good. He did not lose his job and would not lose his job. He did however lose his wife and would in fact, lose his children one day. But today, just today, none of that mattered. All that mattered was that he would stop working. For once.  For his wife. Rest assured, he would come back to work tomorrow and do exactly what he has done for the last 25 years.  But today, he went swimming all alone in the ocean, peaceful at last, thinking about his wife.

12 quick and dirty ways to bring more play into your life!

1. Laugh as much as you can.
2. Surround yourself by people who make you happy.
3. Take a risk. Do something you would never do.
4. Engage, don't disengage. Put down your devices.
5. Be silly sometimes. Don't worry how it looks.
6. Get up. Get physical. Get in your body.
7. Watch children. Join them.
8. Find your community. Find your people. You will find yourself there.
9. Say hello to people. And smile.
10. Declare your truth when you are afraid to.
11. Make funny noises. Song a song. Whistle.
12. Allow others to play around you. Make it ok.

I help Iraqi and Syrian refugee artists sell their work. They are living in the Middle East or else recently resettled in U.S or Canada. Please take a look at this amazing art on the website below and let me know if you would like pricing. It is an opportunity to help and get a beautiful piece of original art. Ships from New York. The end. 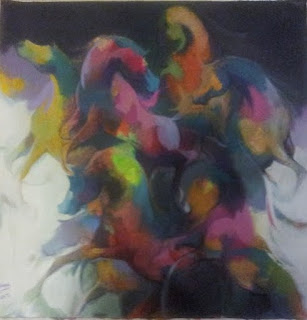 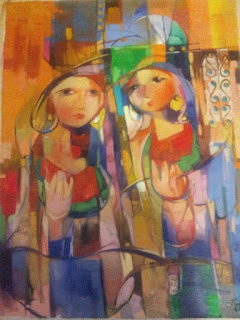 Posted by Kim Schultz at 3:02 PM No comments:

These days I am living in a lot of unknown. I've been stewing and ruminating and mildly freaking out. There's a lot to be determined in the upcoming weeks. Sound familiar?

She takes a big breath.

Big change equals big opportunity. But I know from life that big changes can also kinda suckola. It's a risk, right? You could fail. Bomb. Lose. Suffer. Choke. Fall. Or? Or? You could always trust, trust, trust. So as always I remind myself to trust, leap, breathe and take action.

It makes the scene better. Where do you need to take action in your life today?