Running Into Your Past...

As many of you know, I have worked a great deal with Iraqi refugees --  trying to create awareness and change for these millions of displaced people. While in New York, I have done this through working with The List Project, selling paintings and writing various articles, a play, a book with Veterans Book Project and most recently, a memoir. 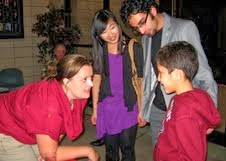 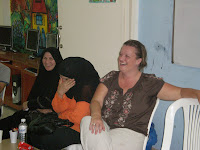 After touring the play for 2 years and finishing the book, I have taken a bit of a step back from advocating for Iraqis. I needed a breath, some space. I made a move across the country. I'm even doing a Christmas show for Pete's sake!

But one day, after climbing up the 3000 stairs of the elevated Chicago "El" train platform, I make fleeting eye contact with a man. I smile and turn away to look at the train map of Chicago (...still being new here and all) when suddenly I sense the man next to me.

"Excuse me," he says in broken English. I recognize the accent. Come on, really Chicago?

He shows me a piece of paper with directions written on it in English and sure enough, Arabic.

"Chicago?" he asks, pointing to his paper. Still not super fluent in the Chicago public transportation system, I look at the map with him, locating the Chicago stop in Chicago, both of us strangers in a foreign land.

"Yes, 11 stops from here" I offer at last, trying desperately to remember my numbers in Arabic before realizing I only learned 1-10 anyways.

"OK," he responds. "Sorry. I speak Arabic. No so English. I Iraqi." Of course you are. What else would you be? I smile.

"Asaalam al-aikum" I greet him, grateful to remember the phrase.

"Ahhhh!" He is clearly happy to partially recognize his own language. "You? Arabic?" he asks, confused.

"I only speak a little. Shway-shway," I answer.

Once onboard the train, I try to explain that I advocate for Iraqi refugees, that I do plays and books to tell stories like his. Forget about it! Neither his English, nor my Arabic could help us through that attempted communication! He goes on to tell me that he and his wife and three children just settled in Chicago two months ago. They fled Iraq, spent a year in Lebanon until fleeing to Damascus for three years, waiting for resettlement.

"At end, Damascus very bad, no good, very bad," he adds with both hands gesturing no, as well. His face changes when he speaks of those years.

It's not easy, this transition to a new country, new city, new people, new culture, new language. It never is. Being a refugee has to be one of the hardest things there is --- especially one from Iraq, with all our prejudices and stereotypes in this country. I can see it on his face. But I also see the joy on his face meeting me...a possible friend, someone in some strange way familiar, or at least kind. I think it is no accident that I was to meet this man today. I think I needed it and I think he did too.

"Afwan," I respond. His eyebrows raise in recognition of my attempt at his language. "Yes! Afwan. You welcome. Very good!"

"Ma'asallama!" I shout out to him waving goodbye, now in full glory mode with my Arabic.

After I settled back in my seat, I smiled once again: my first Iraqi friend in Chicago; first of many, no doubt.
Posted by Kim Schultz at 11:57 PM No comments:


A little bit from my memoir: THREE DAYS IN DAMASCUS
~
We just finished with the last official interview of the day. Thank God. I’m exhausted. After listening to the torture victims today, I am done. How do aid workers do this every day? I need a break. We’re all meeting back up at the Beirut refugee center, before heading back to the hotel. I’m in Beirut, yes. This was before Syria and Omar and I think before Amman. Although I’m not sure, all the stories are becoming one. It’s hard to say what took place where.
As I enter the basement of the center, dreaming of my bed, a bath and a glass of wine, I see a bunch of Iraqis hanging out and chatting in this room. Please God, no more stories. I can’t handle any more stories today. Please let them want nothing from me. Let them have nothing to say to me. I want nothing right now. Just breathe, Kim. I smile and sit with my colleagues.
There are both women and men here, mostly sitting separately. Some women are in the headscarves. Some are not. All ages are present – from young, single, twenty-something men to older women. I take it all in. Iraq. In Lebanon.
Then suddenly someone begins drumming. Huh. Fun. An Iraqi man has grabbed a drum and then another grabs an oud, the traditional Middle Eastern guitar-like instrument, and they are playing together. It’s lovely and Iraqi and makes me happy. We start to smile and laugh and move — the Iraqis and the Americans. I start to loosen up. As there are no translators here, we can say very little to each other, but with music, we don’t need to. So we dance, teaching each other our cultural moves, and laughing to see the other try them on.
Before I know it, a long-haired, olive-skinned man in a bright blue shirt, whom I hadn’t noticed before, with big, big eyes, has taken center stage. This man wants to dance! We all step aside and let him have the focus, as it seems that is what he wants. He is dancing joyfully, fully and with abandon. We are all laughing as he flirts with both girls and boys, and begins to do a mock strip tease. This guy’s a character!
“Oooohhhhh!” we all shout. Someone yells, “Dance baby!”  But now, clothes really are coming off. Is he really gonna get naked? The energy is shifting. We are all sitting by now and he has the stage. It’s getting slightly awkward. He’s dancing half-naked with an empty wheelie chair, sending it spinning violently in every direction and I am beginning to feel dizzy…and uncomfortable. I look to my colleagues. They look as mystified as me. This is not a Dervish dance. Something different is happening. I look back at our dancer. The blue shirt is off and the pants are about to be. But this is no longer flirty or fun, it has turned frenetic and desperate. Something has shifted. I feel scared for some reason now because strangely, this dance now feels — like… war. I start to cry. I want him to stop. I want this to stop. I don’t want any more of this — any of it. What is happening? He is now in just his underclothes and comes up to each of us to dance. He wants a partner. No one wants to be his partner. We all shake our heads no —“La”. At the last minute, I almost say “yes”. I feel like he needs someone, but I hesitate; he is scaring me with the uncertain emotion underneath all this. That, plus he’s almost naked. I’m not quite sure what will happen, so I decline him like the others.
We all watch in silence — awkward, apprehensive, melancholy silence — as he spins some more, sweating profusely, his hair and chair flying frantically, until at last, he collapses. It’s over.
The room is silent. No one moves. I can hear my heartbeat. Time suspends, with everyone uncertain as to the next move. At last, he stands back up and actually bows, his apparent performance over. We carefully applaud, unclear as to what just happened or the appropriate response. The blue shirt guy picks up his blue shirt and the rest of his clothes and says to us, “You made him appear, you know,” and then walks out of the room. I think I saw him crying.
I want to go back to the hotel now.

copyright 2013 Kim Schultz no reproduction without permission
Posted by Kim Schultz at 9:38 PM No comments:

why i hate bucket lists

...because you should do it now. There might not be an opportunity tomorrow. The end.

Posted by Kim Schultz at 5:38 PM No comments:

I need my knees. We all do. Knees are necessary to walk, move, travel -- all things I have been doing a lot of lately! Transplanting to Chicago requires knees. Well, of course, do the math, I somehow damaged my right knee a few days ago, half way into my move, making it very difficult to walk, climb stairs, move boxes...you know...basic moving stuff. Sigh.

It made me think. Is there a reason I have a knee injury, of all possible injuries? (Especially since I own braces for ankles, elbows and wrists, but nothing for knees. Of course!)

As my mom would say...there are no accidents.

This injury has literally forced me to slow down and accept help. My sister went to get the car so I wouldn't have to walk, I hired movers, I accepted the fact that I couldn't unpack in one day! Maybe its the universe forcing me to slow down, forcing me to accept help, forcing me to just breathe through this transition. Maybe the breathing will help me land, maybe the pace will inspire peace. Sometimes the signs are obvious. And simple. We just need to listen.