The day after the election...shell shocked and mournful

...I took the train to go to rehearsal.

As I advocate for refugees and Muslims, I am uberaware of what a trump presidency could mean for them.

So as I walked across the platform, I saw a Muslim woman wearing a hijab. She looked like she could possibly be an immigrant or refugee. I hesitated a moment but then, realized I needed to talk to her. It was so fresh. I thought she may feel scared, vulnerable. So without thinking, I walked over and said something about how I noticed her hijab and that I stand by her and I would protect her if need be, that Trump does not represent all of us and that there are still good, open and welcoming people in this world. She smiled softly at me. And then I was crying but I kept going. All my emotions and fear and protections were spilling out. I want you to feel safe, I continued. You *are* welcome here. And I have love for you as a fellow human. My heart...Blah blah blah.

I went on like this for maybe 5 minutes. Seriously. I was on a post-traumatic roll. Then finally, still crying, I paused and smiled at her.

"No english!" She responded apologetically.

Keep looking out for each other, world. These are dark times.
Posted by Kim Schultz at 11:54 PM No comments:

Trump's view on Muslims is Wrong and Dangerous


I had tea the other day with my Iraqi refugee friends.
I invited them to my local coffee shop. It is a mother and daughter and they both wear the hijab. As we sat at a central table, I noticed they both looked around a bit more than usual and seemed to be speaking in hushed tones. At first I swept past this, thinking I must be imagining it but after a while I realized I was not. They were scared out in public. Because they were Muslim.
This is the world created in no small part by Donald Trump, a presidential nominee 35% of this country thinks is the best choice for leader of the free world. As Donald Trump inches closer and closer to being the President of these not so United States, fear among the Muslim, immigrant and refugee community runs high. And I for one, as a non-Muslim, non-immigrant and non-refugee but American, nonetheless, am horrified.
From the start, Donald Trump, the Republican Party’s uninformed and hate-mongering leader has stoked fear about national security and the threat of terrorism to drive his base. He has said “I don’t want to see hundreds of thousands of people from Syria coming in when we know nothing about them’ — when in fact we know quite a bit about him. He suggested something called ‘extreme vetting’ — although he doesn’t quite seem to be able to define or distinguish this from what we already do. In fact, he is suggesting a blanket ban on Muslims — unconstitutional and unbecoming to who we are. All this while, according to the State Department, the Syrian and Iraqi people, with their wide array of religions, are the most vetted of all refugees. Long and arduous screening processes are already in place.
No one chooses the refugee life. This is not a life anyone wants. It is the last resort. Most refugees are simply desperate to save their families, feed their kids, and on a good day — try to get them a decent education and a shot at some future. I know this to be true because I sat in their homes. I drank their tea. I even fell in love with one of them.
Yes, I fell in love with an Iraqi refugee, a Muslim even. I didn’t mean to, but I did. Hard, fast, furious. Omar was his name. He was exiled in Syria after the U.S. led invasion of Iraq.
For almost a month, I had been travelling in Lebanon, Jordan and Syria having tea and hearing stories from Iraqi refugees just like Omar. I was on a fact-finding mission, with a New York based non-profit, interviewing Iraqi refugees to share their stories in the U.S. in hopes of creating awareness and empathy around this silent, invisible crisis. This was before ISIS, before Syria fell into its civil war, before the Syrian refugee count surpassed even the largest numbers of the Iraqi refugee crisis. This was before all that.
“I miss the good, old days of Saddam,” one forgotten refugee told me. “Sure, he was a dictator, but now there is chaos.” And another: “I fear the worst is yet to come.” And: “I used to be well off in Iraq and now look.” And: “Leaving your home is like leaving a part of you.” And: “I feel like I am dying slowly.” And: “I am human before I am Iraqi, can’t you see?” And: “It is like a prison here.” And: “Do not bother to feed us. We are dead already.” And: “There is no future for me now.” And: “Who asked you America? Who asked you to do this? Who asked you to be God on Earth? Stop interfering!” And, and, and….
And on that day, heart bruised and conscience heavy, I met Omar.
Since my time in Syria in 2009, the refugee crisis has grown exponentially into the largest global refugee crisis in history. There are roughly 65 million refugees in the world today, including 13 million people displaced from Syria and another 5 million from Iraq. They bleed in ambulances, drown in overcrowded dinghies and wash up on sandy shores, creating pictures we want to forget, pictures we force ourselves to forget, not wanting to see.
We vilify refugees — ironic for a country built on, by and for immigrants. Refugees are far from being only Muslim and far from being synonymous with ISIS and yet we make out those seeking asylum to be sneaky little terrorists, criminals with bad hearts and bad intentions, bent on killing us and sullying our “American” way of life with all their “Muslim-ness”.
Fear and racism is truly alive and well, well-stoked by Mr. Trump himself. If only, we all offered our homes and hearts as freely as we offer our fear and hate. If only we all saw refugees, Muslim or otherwise, as they are: human beings just like us.
On Tuesday, we go to the polls. And I hope on Wednesday, Omar and all my Muslim friends, known and unknown can walk into a coffee shop without fear.
On Tuesday, we decide who as a country and as a people, we are going to be.

Kim Schultz is a writer, actor and refugee advocate. In 2009, she traveled to the Middle East as an artist/activist to meet with Iraqi refugees, falling in love with one, forever changing her life. She is the author of a recently released memoir, “Three Days in Damascus” (Palewell Press, 2016) and will have an essay published in Chicken Soup for the Soul: Angels and Miracles (Chicken Soup for the Soul, 2016) this fall. She blogs, tweets and can be generally found at kimschultz.net

https://medium.com/@kimschultz1_68343/trumps-vision-of-muslims-is-wrong-dce4dcf8a5c7#.wbkwksnox
Posted by Kim Schultz at 10:15 PM No comments:

A memoir, in fact. And it launches tomorrow. Big day. Big week. This has been 3 years in the making. 3 years of writing, editing and writing some more. 3 years of looking for an agent, a publisher. 3 years of figuring out how, when, why and how again. 3 years of telling this story that happened during 3 DAYS IN DAMASCUS.

The timing of the book's release is not accidental. In this current election season and the overall political climate, I hope you agree we need to speak for, with and about refugees, humanizing them in a world bent on dehumanizing 65 million people. I hope this memoir is a step in that direction. 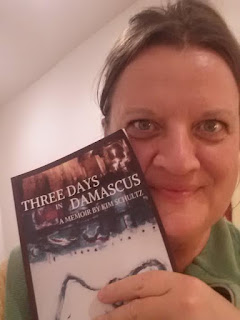 THREE DAYS IN DAMASCUS (Palewell Press)
is about my 3-year fight for love with an Iraqi refugee I met in Syria. Against the backdrop of war, revolution and an arranged marriage, this urgent memoir speaks about and for the millions of refugees languishing worldwide. It is the story of an American woman and an Iraqi man, of an epic journey to safety, a story of culture, devastation, redemption and hope
…a story that isn’t supposed to be a love story.

Buy it on
AMAZON

Posted by Kim Schultz at 9:43 PM No comments: